It is absolutely amazing to have him here, in his house, with his mommies and brother.  Sitting right here on the couch. A-M-A-Z-I-N-G!  We are in newborn bliss.

This newborn bliss is much different that the newborn bliss that we experienced with Ryan.  It is much different to have a newborn and a toddler.  Everything in Ryan's room makes some sort of noise, much of the time he is running around screaming, dancing and ya know...being a 2 year old.  So far, Zachary is adjusting to the noise level and doesn't seem to be too bothered by it.

It is a little nerve racking to have him here without any machines making sure he is still breathing, and all that NICU stuff.  We feed him, change him, bathe him, he is ours.  For the first 2 months of his life, we have not been the sole providers of his care, it is very surreal to have him here now.  We love it. We love that now we can hold him without any wires, we can feed him when we want, I can nurse him as long as he wants to (In the NICU he was only allowed to nurse/bottle feed within 30 minutes), we change him and just be us.  I love being his mama and providing all of his care. On our own.  I find myself worrying about him, is he still breathing, is he eating enough, is the noise too much, is he too cold.  Although we have raised Ryan this little newborn just seems much more fragile than Ryan was.  And, in some ways he is.  Today he weighed 5lbs 12oz. and is 18 inches long.  He is a little teeny peanut!  He has grown out of most of his preemie clothes and is now sporting clothes that Ryan once wore.  It is pretty crazy to see these little outfits that he once was small enough to fit in now on Zachary.

Ryan loves to hold Zachary.  He will often be heard saying, " I hold it?!" He'll hold him for a minute and then say, "Mommy hold it?!" and wants you to take him away.  And then once you do, he wants to hold him again.  He loves to "do nice" and pet Zachary like a he pets Peanut, our aunt's dog.  He has named all of Zachary's body parts, from his hair to his toes.  So far, very little to no jealousy issues.  He is a very proud big brother!

Tomorrow he has a opthamology appointment for his eyes.  Because of his prematurity he could have some complications with his eyes called, Retinopathy of prematurity.  It involves the development of the blood vessels attached to the retina.  In the NICU his eyes went to stage 2, which at stage 3 he would need laser surgery to correct it.  His last check up, some of the vessels looked like they were getting better, and some looked the same.  Tomorrow we will know more about what path this could take.  If he needs the surgery, it fixes the problem fast.  And, because it is caught so early, usually the only thing that it would change is that he could need glasses down the road.  Which is totally doable.

Nursing a preemie is hard.  But, we're sticking to it. I want it to work.  At times I feel like he is not getting enough milk, and other times I feel like my milk is enough to satisfy him.  Sometimes, I nurse him and then he will take about 1.5-2oz. of pumped milk.  There is a lot of nipple action going on around here, thank god for Lanolin!  Between this little nursling and pumping, ouch!  I'm hoping that once he gets a little stronger at the breast, I can feel more confident and his expressed milk bottles will be less.  At least for the month that I'll be home with him.

I'll leave you with a picture of our boys metting for the first time.... 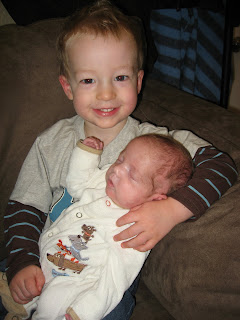 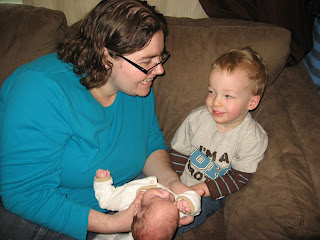 He is unsure of Zachary for about 2.2 seconds 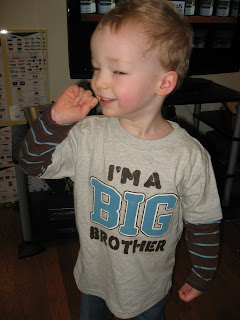 Zachary's first car ride!  This little dude has a set of lungs! 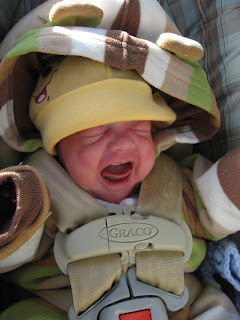 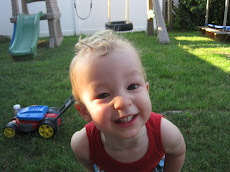 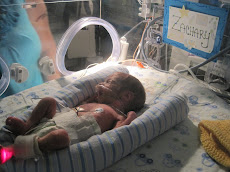